Damn Sesh was an initiative that was created with the purpose to promote and support skateboarding, bringing people together in order to spend a good time and unleash the competitive spirit.

The first edition took place in Braga, on the 26th October. The tournament was divided in 4 categories: “begginers” (under 16), best trick begginers (under 16), “open”  and best trick open (both over 16). There was also a category for female award.

All the money gathered on the tournement was donated to help the skateboarder Fernando Lima get his knee surgery and make possible for him recover and go back to skating!

Fernando Lima is a brazilian skateboarder living in Portugal, that seriously injured his knee while doing what he love!

As a brand, close to skateboarding and it’s community, we felt that we couldn’t stand by and watch without doing nothing, knowing we could do something and make a difference. So, with the help of some partners, we organized the Damn Sesh Skate Contest & Best Trick in the city of Braga!

This was a day to promote skateboarding and all it’s community in the city and gathering everyone to “ride” for a higher purpose!

All the Best Lima! Get well soon! 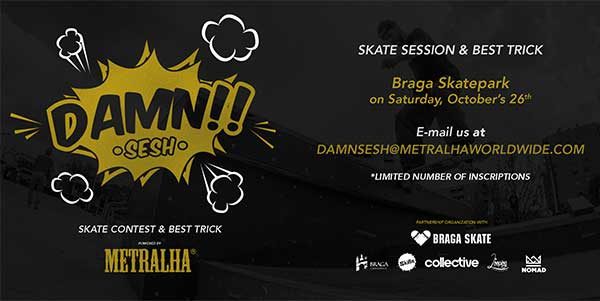 Our biggest thanks for all the support we had from everyone that showed up and all the help from our partners.